3 Life Lessons I Learned From My Parents

My father, Richard, was born with no fingers—just a thumb—on his left hand. His mother, Mary, insisted he learn how to do everything a “normal” little boy would do, like making his bed, buttoning his shirt and tying his shoes–no easy feat for a child with my dad’s disability. When his friends came to see if he could play, Mary would say he could play just as soon as he put on his shoes and zipped his jacket. Often, his friends tired of waiting and left before my dad had finished.

But Mary’s “tough love” paid off—my father learned to not let his disability stop him from doing anything. At a young age, he showed natural artistic ability, sketching and painting everything from dogs, boats and houses, to swirling, expansive modern works. He played baseball, golf and tennis, and was a straight-A student at St. John’s Preparatory School in Massachusetts. He attended Catholic University, studied architecture at the Rhode Island School of Design and then received a Fulbright Scholarship to study abroad. He declined the scholarship and instead accepted a position at Robinson, Green and Beretta, an architectural firm in Providence, RI. In his early thirties, he became one of RGB’s chief designers and youngest vice presidents and showed amazing talent, designing things like St. Jude Church in Lincoln, RI and Schneider Arena at Providence College before dying at the age of 36.

The Lesson: Don’t let handicaps—real or perceived—stop you from pursuing and achieving your dreams—don’t listen to naysayers and never, never give up.

In 1972, my father died after falling and fracturing his skull during a friendly relay race at my 3rd birthday party. My mother, Valerie, was widowed at age 32 and left alone to raise me (3), my brother (8), and my sister (11). My mother had to quickly learn to do things she’d never done before—things like writing a check, balancing her bank account and finding places she’d never driven to on her own.

My mother has always been a strong, intelligent, independent lady, so learning new things didn’t take long. But she took one big life lesson with her: the more you can do for yourself, the better.

Since then, my mother has always taught us to be self-sufficient, to learn how to do as many things as possible, to not be like Dorothy in The Wizard of Oz—to not go SEE the Wizard, but instead, to BE the Wizard in our own life.

The Lesson: Learn how to do anything & everything you can—between books and the Internet, it’s never been easier to be the Wizard and to teach your children the same.

LIVE YOUR LIFE WITH NO REGRETS

About 10 miles from us, there was a man named Brendan, a widower with a 5 year old daughter. He belonged to the same country club that we did and a mutual friend set my mother and Brendan up on a date. It wasn’t long after that that they decided to get married, not because theirs was a whirlwind love affair, but because they had a common goal: to provide a loving, nurturing, safe life for their children–us. My mother and Brendan were married in 1974 and honeymooned in Bermuda.

My life was never the same after that and I will forever be grateful to the man I came to call my father–he was as “real” as the Velveteen Rabbit.

He was a kind man, an unbelievably generous man. He loved me, my sister and my brother as if his blood was running through our veins. He provided for us, put us through school and took us on more family vacations than a sane man should have. He was funny and sweet and the best father a girl could ask for.

Brendan died 5 years ago from a short but devastating battle with kidney cancer. He died at home, surrounded by my mom and the four of us kids. He had lived a full life—he was well educated, had traveled around the world and had achieved great professional success—yet the thing he felt most fortunate about was that he had the one thing he’d always dreamed of—a big family. He died at 78 years old with only one regret, which he shared with my mother about a week before.

He said, “I just wish we’d taken the kids to Bermuda with us on our honeymoon.”

The Lesson: Do everything you’ve ever wanted to do. Say ‘I love you’ every chance you get. Know that it’s never to late. Live each day to the fullest, without regret so when you reach the end of your life, you will truly be at peace. 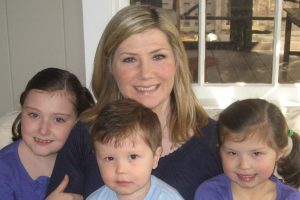 Heather McCarron Allard is the mother of three children, Hope, Grace & Brendan and one big dog, The Dude. After inventing & selling Swaddleaze & Blankeaze, her safe sleepwear creations, she began writing The Mogul Mom, a blog that offers free coaching & resources for mom entrepreneurs. Heather lives in Rhode Island in her childhood home with her husband Scott and their children