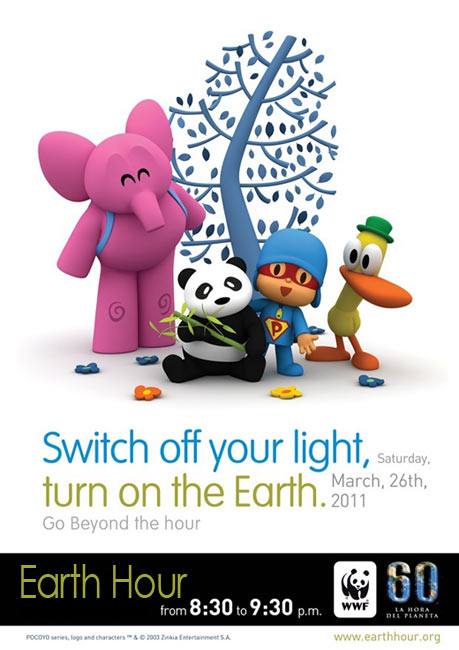 Earth Hour 2011 will take place at 8.30pm – 9:30pm (your time zone) on Saturday, March 26. Earth Hour is driven by the global community’s will to protect the planet we share. Earth Hour’s exponential growth – from a single-city initiative in 2007 to a global movement across 128 countries in 2010 – is indicative of the growing desire for a cleaner, healthier world that is gathering momentum by the hour. On Saturday 26 March 2011 at 8:30pm, Earth Hour will mark a moment of global contemplation to go beyond the hour; a collective commitment by individuals throughout the world to be the ongoing change they want to see in it.

· Switch off your lights for Earth Hour at 8.30pm, Saturday 26 March 2011 and celebrate your commitment to the planet with the people of the world
· Sign up and Share stories of your actions that benefit the planet on earthhour.org
· Sustain your actions beyond the hour, get more information at www.beyondthehour.org

HOW DO WE INVOLVE OUR CHILDREN?

In a bid to extend the message to young children and their caregivers, the Earth Hour organization has appointed the globally loved animated character Pocoyo as the first Global Kids’ Ambassador of Earth Hour, Beyond the Hour. Pocoyo will reach out to millions of preschool-aged fans across the globe, fostering “Learning through Laughter,” to inform children about environmental issues.

At the recent Beyond the Hour press conference in Singapore, Earth Hour Co-Founder and Executive Director, Andy Ridley commented “Everyone has the power to make change: a CEO can change an organization, a 7-year-old can change a classroom, and a president can change a country. What we are announcing today is just the beginning. It is through the collective action of individuals and organizations that we will be able to truly make a difference, which is why we are urging people across the planet to share how they will go beyond the hour this Earth Hour.”

Chloe Nicol, a 7-year-old girl from Australia, is guiding her school to increase recycling and reduce energy waste. The school now also shuts their blinds instead of using air-conditioning to cool the rooms.

Nathi Mzileni, a 15-year-old boy from Swaziland, was inspired to take action in 2010 when he realised his town did not participate in Earth Hour. He started a group at his High School called Green Enviro to educate people about climate change, and this year will single-handedly make Earth Hour a reality in his town of Shimunye, Swaziland.

Parrys Raines, a 15-year-old Australian girl, has convinced her school to install water filling stations and provide each student and teacher with a reusable stainless steel drinking bottle to reduce plastic bottle waste.

What is your story?

How are you going beyond the hour? I will be collecting and posting tips how to change small things in your every day life to save the earth later this week, join by leaving your tip here!