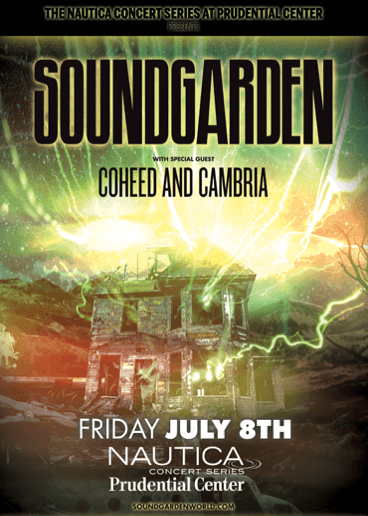 Upon receiving an invitation to attend the Soundgarden concert presented by Nautica, I wasn’t sure what to expect. In all honesty I had never heard of the band Soundgarden in my life considering I was a toddler when they were number one on the Billboard charts. But after reading over the invitation a few more times I realized that Coheed and Cambria was opening for them (a band I have actually heard of) so I decided it couldn’t hurt to go.

The concert was at the Prudential Center in Newark, NJ and truthfully I was weary about traveling there considering the area. However, the Prudential Center was located in surprisingly safe area and was easy to get to, not to mention that the facility itself is incredible. Thanks to Nautica, the parking was painless and the suite we were in was amazing. They provided us with great food and a view of the stage that was remarkable. I had only been to the Prudential Center once before and let me tell you my seat then was incomparable to the experience from the suite. So, thanks Nautica!

Coheed and Cambria had their opening act and I was a little disappointed to see that there was almost nobody in the crowd at this point. The arena seemed almost empty and nobody was really paying attention to the music. I know it was just the opening act, but I guess I expected a better turn out! The music from Coheed and Cambria was hard rock/metal with an unforgettable lead singer due to his full head of curly almost afro-like locks.

Once Coheed and Cambria had finished their opening act, Soundgarden took the stage. To my surprise, the second Soundgarden hit the stage the arena was almost full. Soundgarden’s music was reminiscent of the 90’s grunge rock era (when they were at their peak) and seemed to have many loyal fans. I learned that Soundgarden hadn’t had a concert in over a year, and before that since 1997. Upon looking into the crowd, the entire audience was filled with people aggressively dancing to the rock music playing on stage. The lead singer, Chris Cornell, engaged the audience by having everyone sing along and made jokes throughout the entire concert.

Overall, even though I had previously not known of Soundgarden, I had a great time. Between the arena, the hospitality of Nautica and the hardcore music this experience will definitely be a memory of the summer that I won’t forget.

Disclosure: I was invited to the event by Nautica.

Carli Halper is currently a college student studying at the University of Delaware. She is majoring in communications and is a member of the National Society of Collegiate Scholars. She likes to think of herself as the average college girl that loves to shop. Her other interests include the beach, reading, and spending time with family and friends. View all posts by Carli Halper