My Life is Amazing Because I Completely Broke the Rules 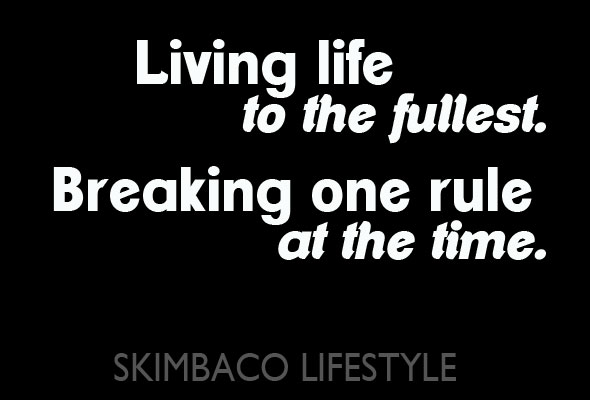 This week in Live a Little series I encourage you to break the rules.

Not just the best moments in my life have been when I’ve been crazy enough to break the rules, but my entire life is amazing because I’ve broken so many rules on the way, and I’ve followed my heart instead. Here is a short version of my story, how I broke the rules and decided to start living Skimbaco lifestyle.

Now, I hope you won’t be disappointed in me (my parents and in-laws, stop reading), and I guarantee I’ve paid my taxes, only had two speeding tickets in my life, never been arrested, and always paid the rent and I’ve only lied to my husband once (didn’t tell I scratched his car, but even that I have confessed later on). The important big rules I do follow, in fact I’m pretty fanatic not breaking them. Ever. But the other rules… I break them all the time.

The Rule-Breaking Moments Changing My Life

I went to high school where I didn’t know anyone.
I broke from the “popular pack” to be on my own and to follow my own dreams.
Crash course to adjusting and carving my own path early on.

I skipped school. A lot. (I still made good grades.)

When in high school, I skipped school and spent days with my grandmother instead. She’d read me aloud how her book was coming, and we’d drink tea all day long. The sound of her typewriter and her guts to write her book year after year still inspires me to write.

I also skipped days to go on modeling trips to Spain, but that wasn’t as inspiring, just fun.

When in college, I skipped school and already kick-started my career. I managed an IT-inventory system for Mulberry Shop (very high tech in 1996) and did marketing for an entertainment/ice hockey arena.

I learned that when you work hard you do get ahead and you get what you want.

I left my boyfriend who was the “good catch”, who had money, a sports car and a promising career as an engineer. But who was an asshole and abused me when nobody was watching.

At 22 I worked on daily basis with rich 30-40-somethings whom I had thought I wanted to be one day. I realized I was going after a life I didn’t even want, and I was becoming a person I didn’t want to be. I quit college, quit my job, and moved to Germany (from Finland where I grew up). 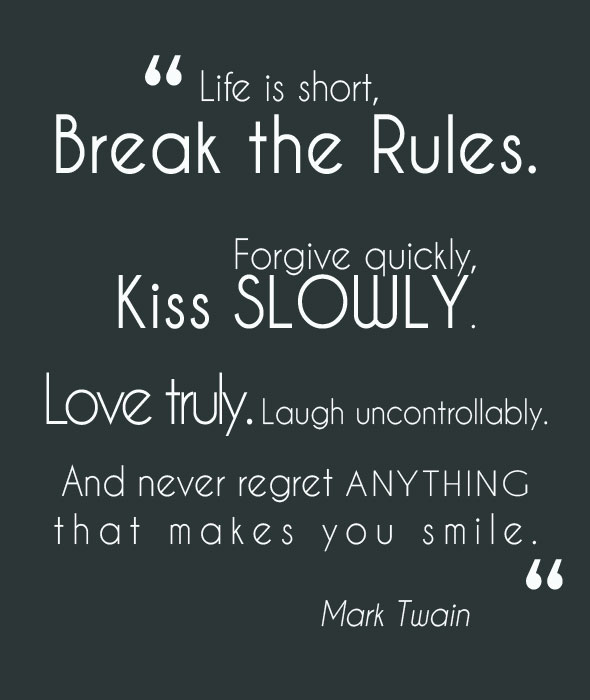 I decided to go after things in life that made me happy, not what made me money.

I learned there is love at first sight and it’s worth fighting for.

I realized sometimes you have to do things you don’t want to or things that even make everyone laugh at you to be able to make your dreams come true.

I broke the rules by going backwards in my resume. I needed a job to make money to go to the USA for three months (longest legal visiting time without visa), and before I found a marketing job I worked in a shampoo factory for a week. After that I did marketing for a roadside hotel AND I cleaned the rooms before work, AND was a bartender in their restaurant on the weekends. People thought I had lost my mind, and thrown away my “amazing life” of hanging out with the elite and choosing not-so-glamorous work and saving every penny – only to move to the other side of the world to be with a jet-fuel stinking pilot. But a very handsome one.

I was determined to be happy, and not play by the rules.
I was shaking when I was leaving on a jet plane to New York the first time in my life. My father asked why I was so nervous; I had been flying before. I was nervous because I knew I’d never come back.

I got married on a lunch break.
My parents met my husband when I was already pregnant a year later.

I didn’t want to plan life, I wanted to live life.
We had three children within three years, and they were all born in different countries.

I love my kids, and my husband, but hated being a housewife.
I was determined to find a way to be home, take care of my family AND have a career and started being serious about an online business in 2004. By 2007 I had saved enough money to start a corporation and become a CEO of it.

I’ve spent all of the hard-earned money to a dream that I am still working on, building Skimbaco. But took an agency job and worked several years building other people’s businesses instead of mine.

I got recruited to some of the largest PR agencies in the world last year. I broke the rules, and what people expected from me by “throwing away” my Addy Award-winning social media strategist career in the US, and by moving to Sweden.

I broke the rules because I wanted to live by example – living life to the fullest and throwing yourself to adventure.

My adventure is living Skimbaco lifestyle and building Skimbaco, watch me go.
I might succeed, I might fail, but I will have no regrets.

Every time I’ve had guts to break the rules – the rewards have been much better than when following the rules.

JOIN ME? Break the rules of life how it “should” go, and make your life extraordinary instead. Live Skimbaco lifestyle with me and make your own rules.

break the rules, GET INSPIRED, LIFESTYLE, live life to the fullest, SKIMBACO