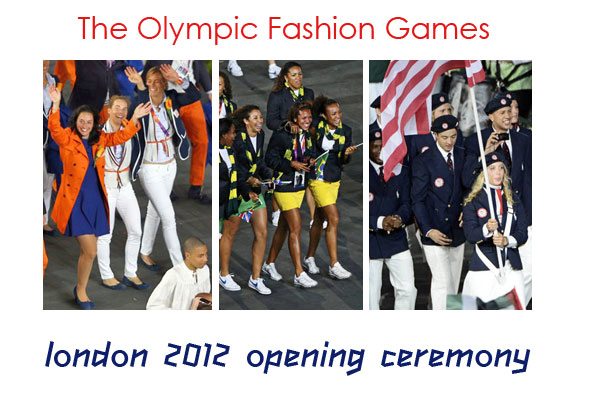 Stay tuned with latest fashion and trend news and subscribe to our weekly fashion update.

I hear the Olympic Opening Ceremony divides people in those who just thought it was plain weird and to those who thought it was brilliant. I can see it both ways, but we had so much fun watching the Opening Ceremony, that I’d probably lean on calling it Britishly brilliant – I especially liked the James Bond and Her Majesty parachuting from a helicopter (which I missed first but luckily saw later!), Mary Poppins, kids jumping in beds, Rowan Atkinson as Mr Bean, the 80s and 90s dance moves and David Beckham on a boat. And then judging all of the Olympic fashions as each country’s team walked on the stadium. Good times.

There has been a lot of hype about the Olympics Fashion this year, several countries had amazing designer names such as Giorgio Armani for Italy, Ralph Lauren for USA, Stella McCartney for UK designing the team uniforms. Surprisingly none of these big names were not a big hit at the Opening Ceremony. Overall I think many outfits would be great for either Halloween or for flight attendants. Italy’s Opening Ceremony outfit was great design, UK’s outfit was white and gold and NOT designed by Stella, and more about Ralph Lauren in a bit. The real winners are below. 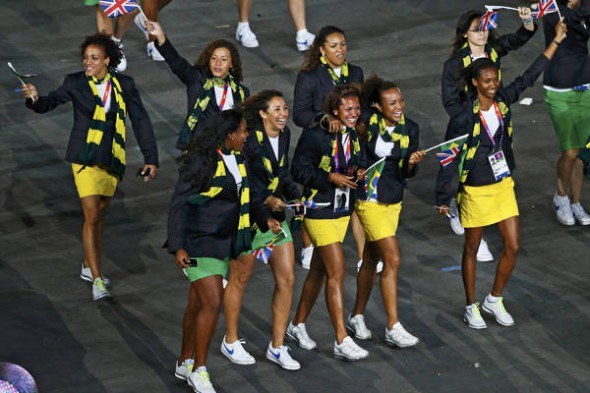 THE BEST NATIONAL COLORS & OLYMPIC SPIRIT: I love how Brazil incorporated their flag colors in the team outfits, and the colorful yellow and green miniskirts just work! Preppy with the blazer, Harry Potter go rugby with the scarf, and the shoes say “let’s go and have great Summer Games” with their neon shoe laces. Sporty, fun and yet dressy enough for Opening Ceremony.

THE BEST DRESSED TEAM: My favorite team was the Team Netherlands – they wore the navy blue blazer & white pants combo the best – the blazer his well fitting, has great white detail, the belts on women’s outfit are very trendy, and the women’s blue dress isn’t too bad either. The blue ballet shoes are brilliant, dressy but not stuffy, like everything in their uniforms. Sporty, preppy, colorful, ready to take over the world. Classic idea done very trendy, and incorporated their national color orange (that happens to be the color of the year!) extremely well. I also like that there were different options to choose from for each athlete and how the entire team looks uniform – even when the individual outfits are not the same. The Netherlands clothes were designed by Suitsupply.

THE BEST DRESS/ONE PIECE OF CLOTHING: Team Paraguay’s dresses bring sexy back to the celebrations of the nations. The red dress is absolutely stunning, as is Leryn Franco, the team’s javelin thrower wearing it. While the men’s blue blazers are questionable, and the they could have left the straw hats home too, the dress was absolutely one of the most fashionable pieces of clothing in the Opening Ceremony showing that it’s possible to wear something sexy and flattering and still make it look fresh for a sporting event. 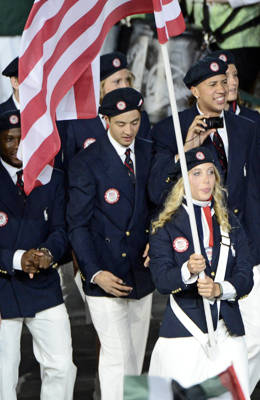 Let’s just say, I love Ralph Lauren, and even when RL got slack for having large polo pony in the Beijing Olympics, I was all over it, and loved the outfits. I completely agree with the un-patriotism of manufacturing the Olympic clothing in China, but I also think that we have to put our money where our mouth is – when is the last time you even checked where the garment you bought was made in?

I think when we as consumers make purchasing decisions based on ethical questions like this, we can have our voices heard much better, but if we only criticize once the decisions have already been made, it’s too late. If you truly care about what kind of image RL is giving to the Team USA and our country by showing up in the Olympics in China-made clothes, please start making better purchasing decisions and start supporting clothing made in teh USA. 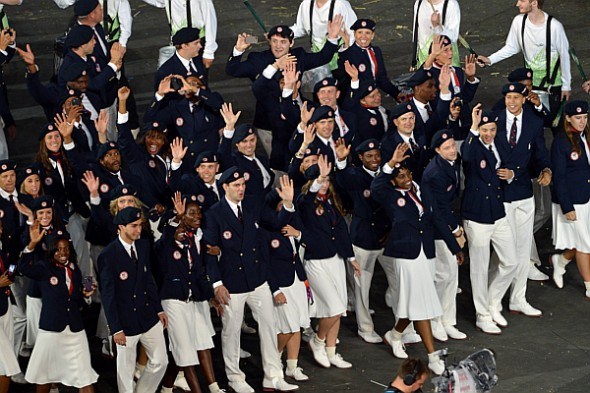 But let’s get back to fashion and simple look at the clothing.. Did you like the look of the team USA’s Opening Ceremony outfit? The blue blazer is always an Olympic classic, but this time it lacked both sophistication like Italians, and making the statement like the Netherlands, and it also didn’t stand out in the sea of red, white and blue outfits this year. The hat looked very Roots/Canadian to me, and while the women’s white skirts were very nicely cut, I didn’t care for the men’s pants as much. The shoes – not a big fan, especially with the socks. Over all a cute look, and it doesn’t look BAD, but it doesn’t look as good as in the last Olympics, nor meet the expectations I had.

Wearing the blue blazer for the Opening Ceremony is a classic move, white pants another one. Perhaps because of the host country UK’s red, white and blue Union Jack several countries had chosen the same colors for their own team outfits this year to respect the host nation. I actually liked the ones that added a little national spin to it the best and who were not afraid of adding color to the classic look. 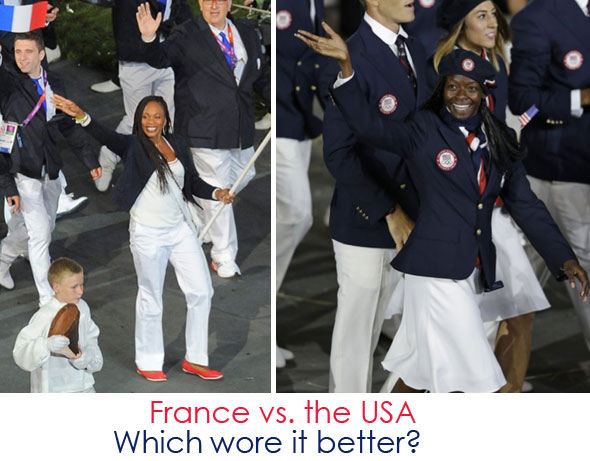 French team took minimalism to the top, and the simple blue and white just works. Maybe lacking some Olympic spirit, but not style. I don’t care for the men’s white shoes – but women’s red ones looked fantastic. 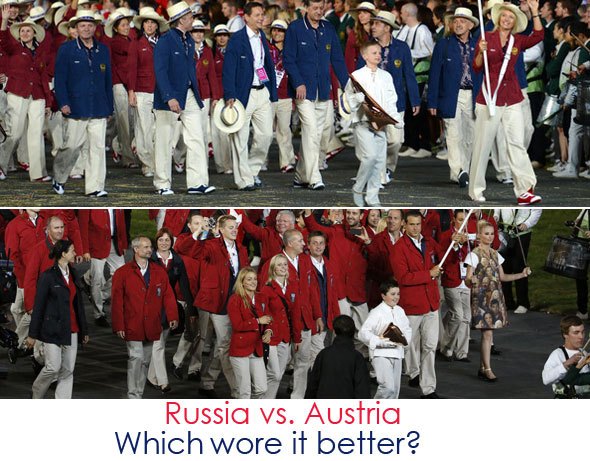 Russia and Austria were among the teams dressed in red, white and blue, and I don’t know if it’s possible to pick a real winner from these two. These two teams sum up what several teams looks liked. Blah. 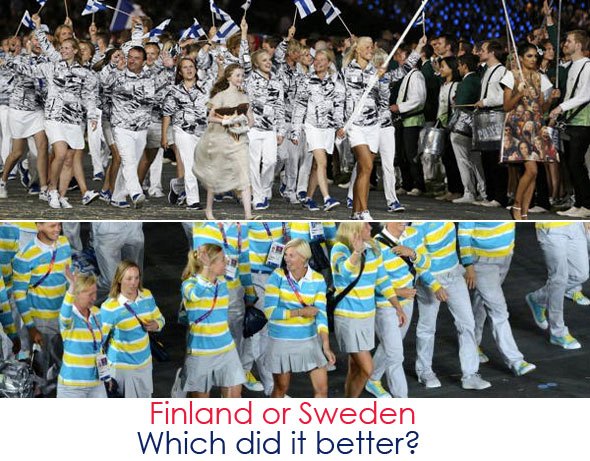 Where the heck was the famous Scandinavian design?

The Finnish team wore printed jackets and white bottoms, designed by Martti Kellokumpu for Halti. While the print represents Finland well and I like the idea, too bad you can’t really see what the print looks like on TV or in the stadium. The blah tennis shoes and skirt make the entire outfit very unmemorable.

I didn’t know Swedes actually wore their flag colors, I thought the tacky Swedish tees I see in the shops were only for the tourists. They are absolutely making an impression, I’m just not sure if it’s a positive one. It is said though that all PR is good PR and I can tell Sweden is getting to many of the fashion posts written all over the world right now.

I can see both outfits worn at Scandinavian homes while watching the Olympics games, but despite the sneakers I don’t know if they would qualify to even run to the store quickly to buy more beer. At least Finland tried, but I might be biased. Do we have a winner here either?

Enjoy the Summer Games – and leave in the comments which part of the Opening Ceremony was your favorite!