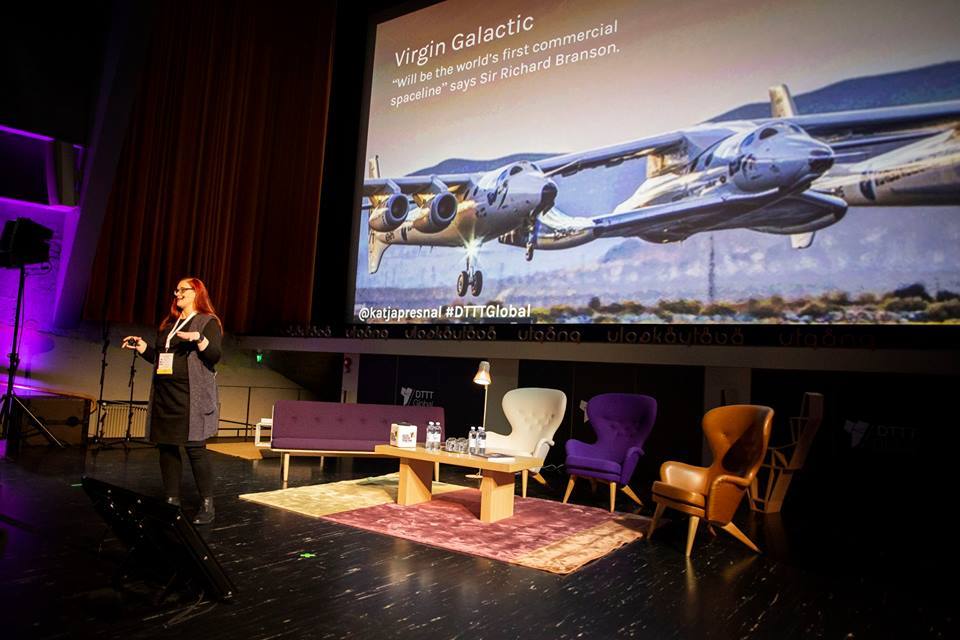 Read some of the Press Katja Presnal has received.

Katja Presnal is an editor and founder of
SkimbacoLifestyle.com online magazine.

She inspires people to live life to the fullest, and finds silver lining in everything with her witty yet positive attitude.

Katja was also a Home channel editor at LifetimeMoms.com where she wrote about anything home related from buying a home to decorating it. 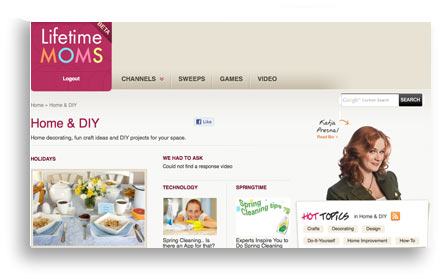 Skimbaco Lifestyle and Skimbaco Home were partially syndicated (and translated) in Finnish and available under MTV3, the major TV Network in Finland in 2010. Skimbaco and MTV3’s partnership resulted in phenomenal traffic on the Skimbaco’s Finnish blogs, and press mentions in over 20 Finnish major mediums, including TV, radio, blogs, websites, newspapers and magazines.. 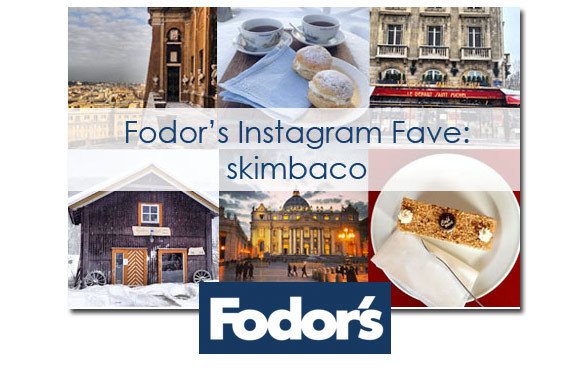 Katja’s first ebook Instagram as your Guide to the World – How, What and Who to Search and Follow on Instagram to Help You Travel the World published in May 2013 and the foreword was written by the New York Times Best Selling author Chris Brogan. 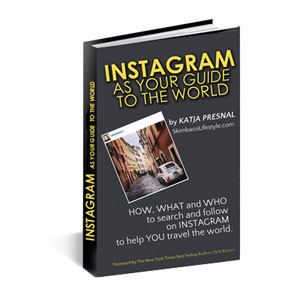 Some of the travel destinations Katja has worked with are the Le Méridien Bali Jimbaran hotel opening in Bali, river cruise in France with European Waterways, two week trip to Canada with the Canadian Tourism Commission, and in an Angry Birds-themed Finnair Flight from Helsinki to Singapore. Katja has attended several events for example Walt Disney Cruise Line’s Mommy Blogger Cruise to Bahamas, Inaugural Christening Cruise of Disney Dream, Frito-Lay’s campaign launch with a red carpet event with Brooke Burke and Mel B., Academy Awards® Red Carpet with Kodak, U.S. Tennis Open, New York Fashion Week, Snowboarding Grand Prix and interviewed several celebrities. Katja and Skimbaco Lifestyle has co-hosted the National Mom’s Nite out with Maria Bailey twice in New York City. Katja has written for Type-A-Mom, and her home decorating posts have appeared on Better Home & Garden’s website, and her home entertaining tips have appeared on the Redbook magazine among other national and international magazines.

Katja Presnal was named as one of the 50 most powerful and influential women in social media already in 2008 and continues to be named in Top Travel People to Follow on Twitter-type of lists. She was also named one of the Top 100 people from Finland to follow on Twitter by Yle, the largest broadcasting/media company of Finland.

She is a seasoned PR, sales and marketing professional with e-commerce experience and one of the trailblazers in social media marketing industry, and an award winning social media strategist. Katja Presnal built her reputation by offering an All-In-One Marketing Solution in the children’s fashion industry including Online Store, Lifestyle Blog and PR Service. The products she represented received national and international press, including a product endorsed by Tom Cruise on Oprah Show. Her unique position as a marketer and a blogger gives her the ability to understand social media from the influencer perspective as well as the marketer’s perspective. Her talent is to see the needs of the consumer, the marketer and the blogger, and create strategies that bring them together and build advocacy.

Katja held a senior management position as a Community Director for social shopper marketing agency Collective Bias, and spearheaded the company to set up the community processes as well worked as a social media marketing strategist. Katja tripled the size of their a social media influencer community Social Fabric, and created social media marketing strategy for agency’s clients such as Colgate, MurphyUSA, Philips, Abbott, CoverGirl, Ubisoft, Elmer’s, ConAgra, Seagate, Smart & Final, Truvia. Several of the campaigns she was involved with won Addy Awards. One of the most successful campaigns she designed and run (and won a Gold Addy for) was Hershey’s Better Basket campaign, in which Walmart shoppers were encouraged to do charitable things during Easter time. She hired bloggers across the nation to donate Easter baskets for local charities. During the campaign a charity blog hop received 700 blog posts and resulted in Hershey donating $7,000 for the Children’s Miracle Network and numerous acts of kindness. She also designed cause marketing campaigns Back to School with Purpose for DaySpring and Bag It Forward for Elmer’s (also won an Addy Award) encouraging moms to take action during back to school time. She also created a strategy for Kmart’s Outdoor Living campaign for summer 2011 which resulted Kmart being the #1 retailer of outdoor furniture in the US for summer 2011.

“Navigating the digital marketing world isn’t as easy as some people like to claim. It’s takes community leadership, strategic marketing savvy and a passion for social media. Katja is an expert digital community manager and leader in social media. She is a respected speaker and group leader. I’ve enjoyed working with her and always learn from her well-rounded expertise and leadership skills.”
Debba Haupert , Social Media Entrepreneur , Girlfriendology

You can also read her professional profile at LinkedIn.

She has been part of several internal conferences/events for large corporations such as Pepperidge Farm, PepsiCo, Colgate, McDonalds, MTV3 and Babycenter.com.

To invite Katja Presnal to speak at your next social media event, email katja (dot) presnal (at) skimbaco (dot) com.

Scroll down for some referrals and examples of Katja’s work. This list is just a small view to some of the referrals and campaigns Katja has done. Subscribe to Skimbaco Lifestyle to keep in touch.

“As one of the founding members of the Walmart Elevenmoms program, Katja was both innovator and inspiration in development of the group. She is a catalyst for ideas with boundless energy and drive to make things happen. As one of the foremost leaders in the Social Media space, Katja brings a depth of knowledge and understanding of what really makes the medium work along with the true connections and relationships with key people in the space. I highly recommend Katja as an agent of growth in the industry.”

“The Hanes Comfort Crew is a network of dynamic and prominent social media influencers who converse with Hanes about comfort, clothing, and community. Hanes went to great lengths to find the best and the brightest in the social media space and is honored to count Katja Presnal among the members of the Comfort Crew. Katja brings great insight from the perspective of a successful blogger on her “Skimbaco Lifestyle” outlet, an innate understanding of the mom community as the co-host of “National Mom’s Nite Out,” and an affinity for brands including her work as one of the original Walmart 11 mom bloggers. Hanes is grateful for the opportunity to work with Katja in this capacity.”

“I have personally worked with Katja on a variety of social media outreach programs and I am consistently impressed with her intelligence and insight. Katja isn’t just a great blogger, she understands the social web and how to create value for her partners. I am proud to have Katja as a member of the IZEA family and would highly recommend her to anyone seeking expertise in social media.”

“Katja has an excellent grasp of not only social media platforms but also how to effectively strategize, promote and handle the PR for her clients and for projects she chooses to support through her blogging. She is often a go-to person for ideas and outreach relating to social media. I highly recommend her.”

“I had the privilege of seeing Katja speak at the Mind of Moms Conference this past May. Her engaging presentation on navigating the social media space gave me my new favorite quote: “Social media is an ocean. Learn to swim.” Her insights on the blogging industry are relevant, compelling, and clearly stem from her personal experience. She has mastered many strokes among the murky waters of social media, even making the Periodic Table of Social Media Elements. Katja embodies the entrepreneurial spirit – from marketing Ladybug shoes to glamorously redecorating her entire bedroom on a $500 budget – all while caring for three kids.

Katja and Skimbaco Lifestyle have been a tremendous asset to the Real Girls Network as a contributor to DivineCaroline.com and a smart representative for top tier advertisers.”

“Katja is very knowledge and passionate about social media and moms.”

“Because of her influential voice and social media presence, Katja is a key part of the Real Girls Network. Both advertisers and readers appreciate her creative, uplifting content.”

“Katja is a very passionate entrepreneur. We worked together on a sponsored campaign to promote her business on Boston Mamas and she was enthusiastic, quick to respond to inquiries, and really “got” (both from her experience as a retailer and social media enthusiast) how to effectively assemble a cool campaign that would be mutually beneficial to both our companies. It’s been a pleasure to continue to work with Katja via other ventures as well.”

Getting Product on Oprah, with a little help from Tom Cruise

Oprah Show with Tom Cruise aired in May 2008.

Products placed in magazines, national and international. DeAnna Cochran Jewelry and Monkey-Toes shoes in the Australian version of OK! magazine.

Over 50 blogs featured the story within a week of the show airing and several magazines and blogs afterwards. 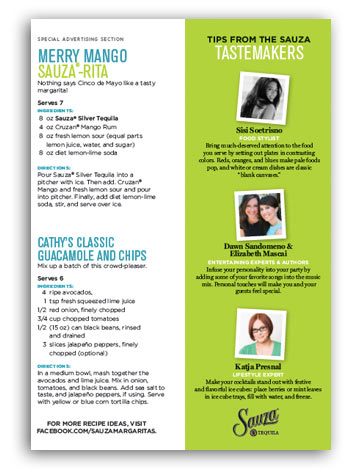 One of the Sauza Tequila taste makers in the Summer 2011 advertising campaign in REDBOOK magazine.