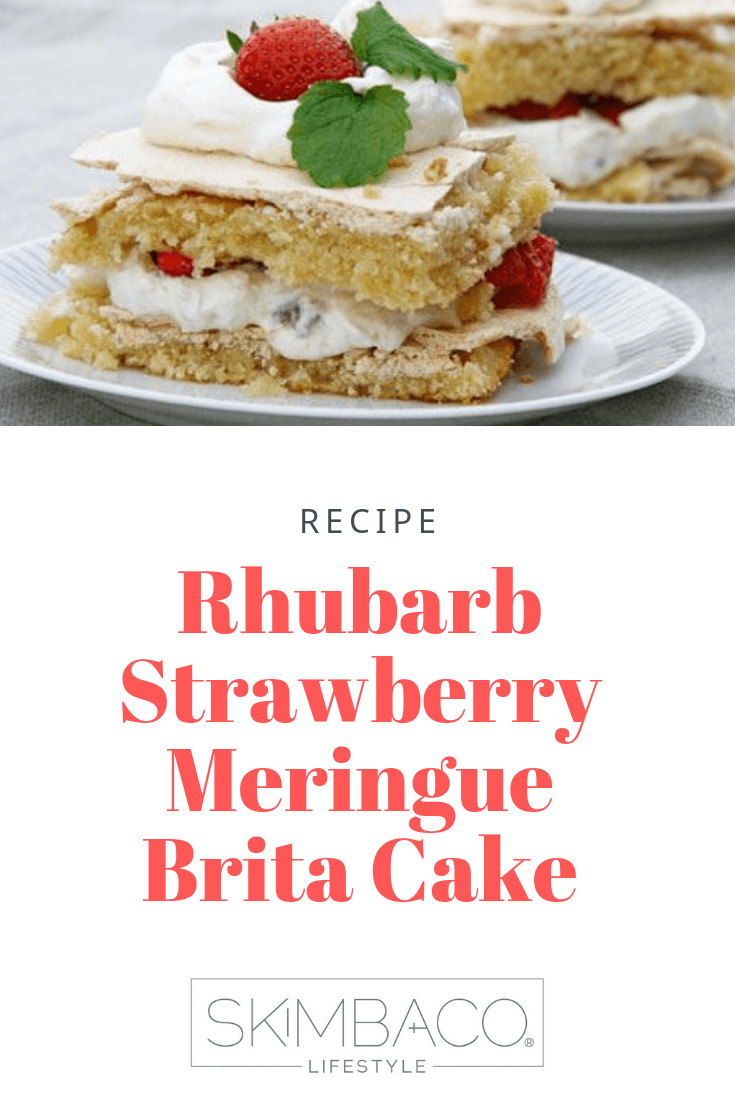 This Scandinavian dessert/cake is amazing. Like really amazing.
Like the best-I’ve-ever-made amazing, and I even messed up the recipe and it didn’t matter (read more below the recipe and I’ll explain).

Brita cake, also called meringue cake is one of those Scandinavian desserts that you can’t miss. It’s popular in Sweden and Finland, and it’s one of my favorites. Basically it is a cake with a cake crust with a meringue crust on the top, baked in the oven at the same time, and then assembled with layers of whipped cream and berries, most often with strawberries. There are many versions of this dessert cake, and it is THE Scandinavian summer party recipe to try. Since rhubarb is in season, I decided to make my Brita cake with rhubarb and cardamon whipped cream with strawberries and made my recipe inspired by the one I found at Valio.fi. Please read the recipe with some thought before getting started, I have some tips below and I recommend making the rhubarb filling the day before. 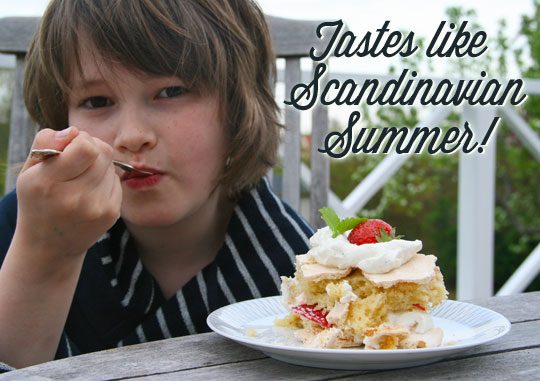 The tart rhubarb combined with the sweetness of the meringue cake, with cardamon whipped cream and lemon balm and strawberries… this is what Scandinavian summer tastes like. 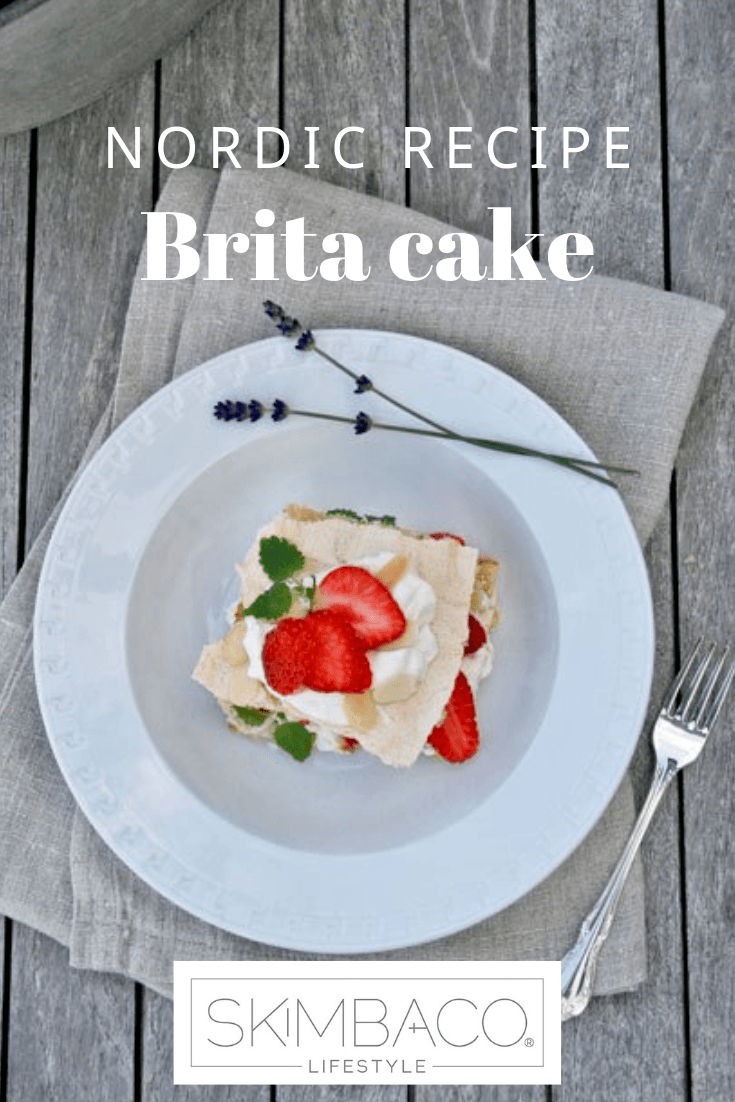 2. Beat the butter with electric mixer until it’s soft, add sugar, and mix until fluffy.

3. Separate the egg yolks from the whites when they are still cold, be careful not to get any yolks to the whites. Add egg yolks, one at a time to the butter & sugar mix and continue beating.

4. Mix flour and baking powder. Add flour mix with a shifter and milk a little bit at a time to the butter mix while mixing with low speed. Beat until batter is mixed well.

5. Pour the batter onto a baking sheet on parchment paper and spread it evenly. 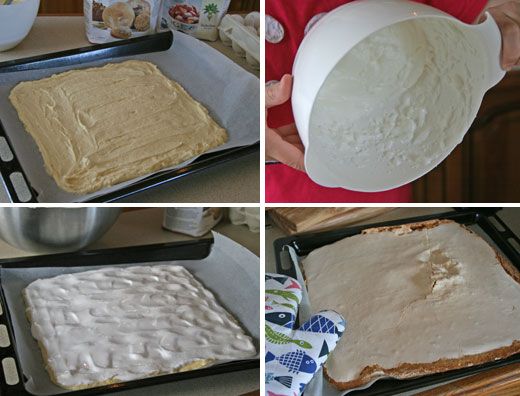 1. Make sure the egg whites are cold, and your bowl and mixer clean and dry.

2. Whip egg whites until stiff peaks form and even when you turn the bowl upside down it won’t fall out.

3. Add sugar a little bit at the time and keep mixing until the texture is thick and has a little bit shiny consistency and peaks form (Read more tips below).

4. Spread the meringue mix on the top of the cake batter mix evenly.

1. Chop the rhubarb into small slices and cook it in a small pot with the water.

2. Add sugar and the potato flour after the rhubarb has gotten a little soft and keep cooking on slow temperature until the consistency has turned thicker and most of the water evaporated.

3. Let the rhubarb filling cool completely, the best is if you prepare this a day before.

1. Whip the whipping cream and add sugar and the cardamon (optional, but highly recommended!). Mix the whipped cream filling with the rhubarb filling carefully.

2. Split the cooled down cooked cake into half forming two rectangles – or cut small squares of the cake like I did and assemble directly on dessert plates.

3. Assemble the cake by layering the cake, then the rhubarb-whipped cream filling and I also already added the strawberries in the mid-layer. Add the other half of the cake and finish with a little more whipped cream and strawberries and the lemon balm as garnish. 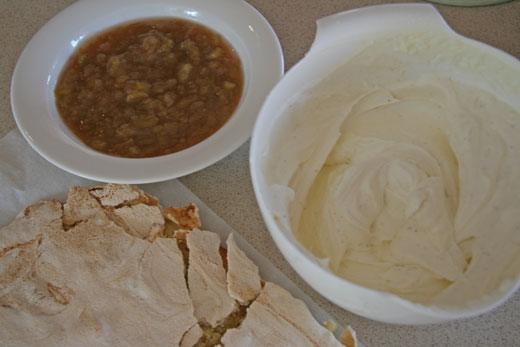 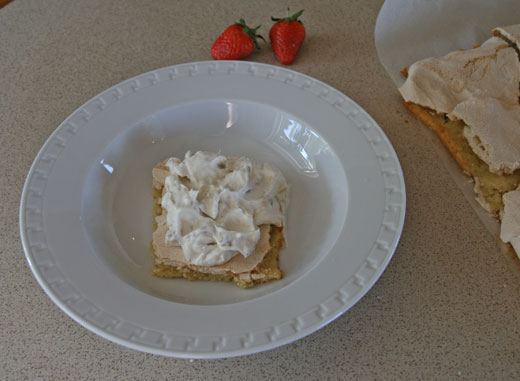 You can assemble this a several hours before, but I recommend doing the baking and the rhubarb filling the day before and then just whipping the cream and assembling before serving. As you see – I didn’t actually make a cake, this recipe is for probably 8-10 people and there are only 5 of us.. so I assembled it directly to dessert plates and saved the rest for the next day! 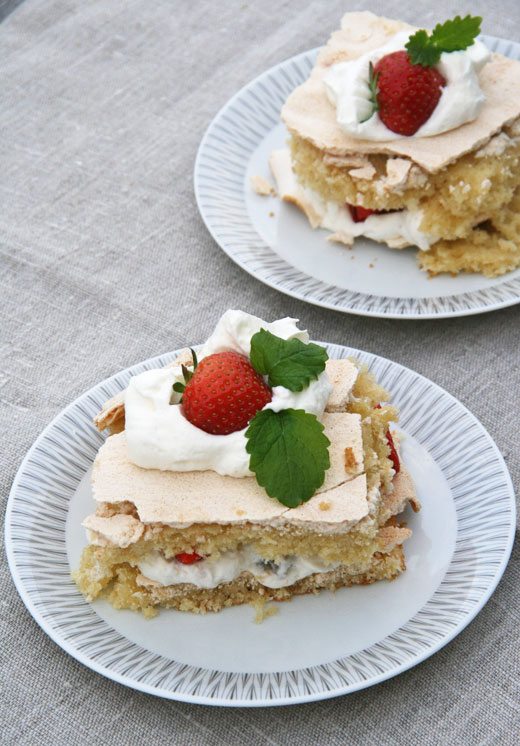 I’ve made meringue before, and with good results, but for some reason I did not get it right when making this recipe. The key to making meringue is to separate the egg yolks from egg whites and have absolutely no yolks when making the meringue. You also can not have even one drop of water in the mixture and all your tools have to be completely dry.

I accomplished separating the egg whites all three times I tried it, and I whipped the egg whites until it thickens so much that you can even turn the bowl upside down and it will not move. Then you add sugar, and whip it some more until it forms to this shiny consistency and you can form peaks from it. I added vanilla sugar like it said in the recipe, and something happened and it lost its consistency. I tried it three times, and finally realized it must be something in the vanilla sugar I was using (I thought it was just sugar and vanilla, but the one I was using also had potato flour). Either way, I just let it go, and started cooking my cake since I had been pretty much failing on whipping the meringue for over an hour now.

So – this cake is supposed to have a hard meringue layers, but since I couldn’t get it right, I just spread the mixture on the cake regardless and put it in oven. The top isn’t as hard as it’s suppose to be, and it is pretty fragile making it difficult to assemble as a cake, but I learned from my mistakes and hopefully next time get it right. Well, if I want to. Because even with the messed up meringue, and assembling it directly to everyone’s plate instead of making a cake out of it, this dessert was AMAZING, and secretly I’m happy I messed up.

The bottom line: even if this cake sounds too difficult and you are afraid not to get the meringue right, IT’S OK, still give it a try! While we all love pretty cakes, we all love more YUMMY cakes, and this wins in the yumminess. 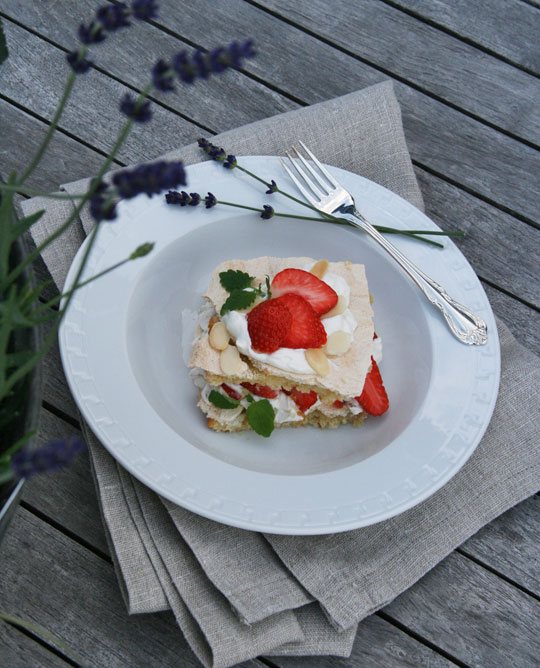