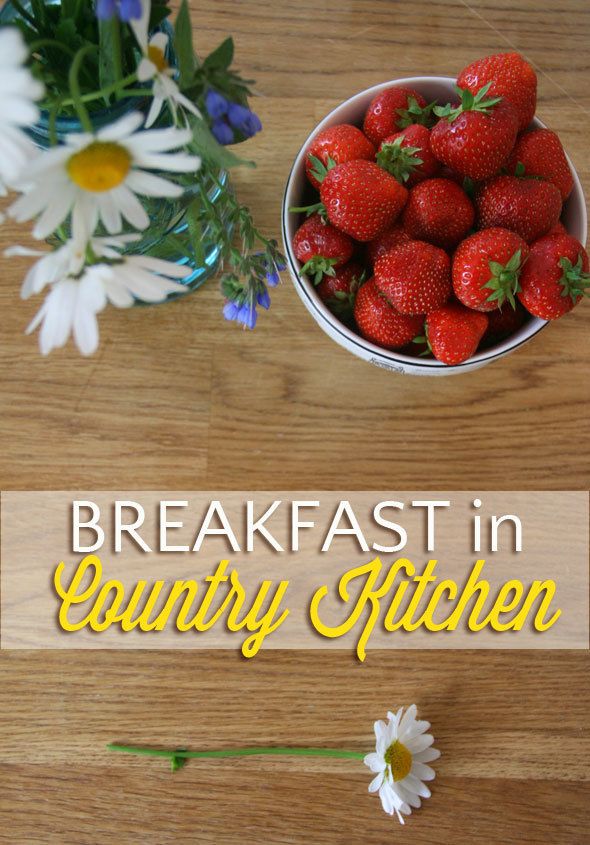 We recently moved into a mansion in the Swedish countryside and I wanted to invite you in to see what is a pretty typical Sunday breakfast in our house: crêpes made by my daughter served in our country kitchen. Now when it’s summer time, we enjoy this treat more than just Sundays. 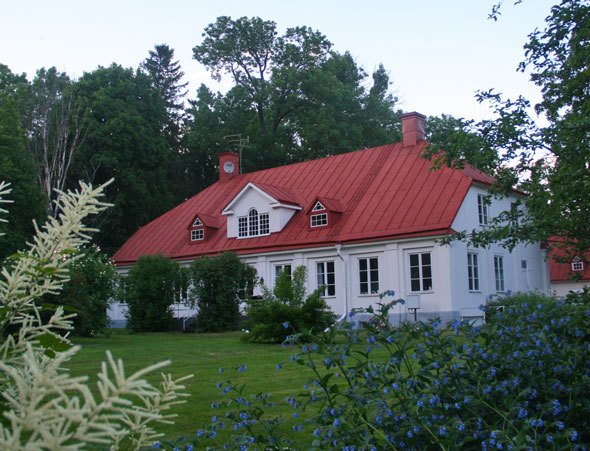 This is our new home where we moved in last month. Believe me, I know how ridiculous it sounds that we moved into a mansion, especially considering some of the un-mansion-like places we have lived in. I think the housing-karma and humble attitude throughout the years finally caught up on us, and we are enjoying mansion-living to the fullest for all of the rental-apartment suffering we have experienced during our last 16 years of nomadic living. Out of the 16 years, we have lived over total of 2 years in small furnished apartments, hotels and once even in a small mountain side cabin in a horse farm for a month. I’m not complaining about all of our past dwellings by any means, we’ve rented and owned some pretty nice houses, but they all pale in comparison to The Mansion.

I’ve posted a few pictures of the house already on my personal Instagram account @katjapresnal, and will probably publish more here later on as well. Today, come and visit my kitchen. 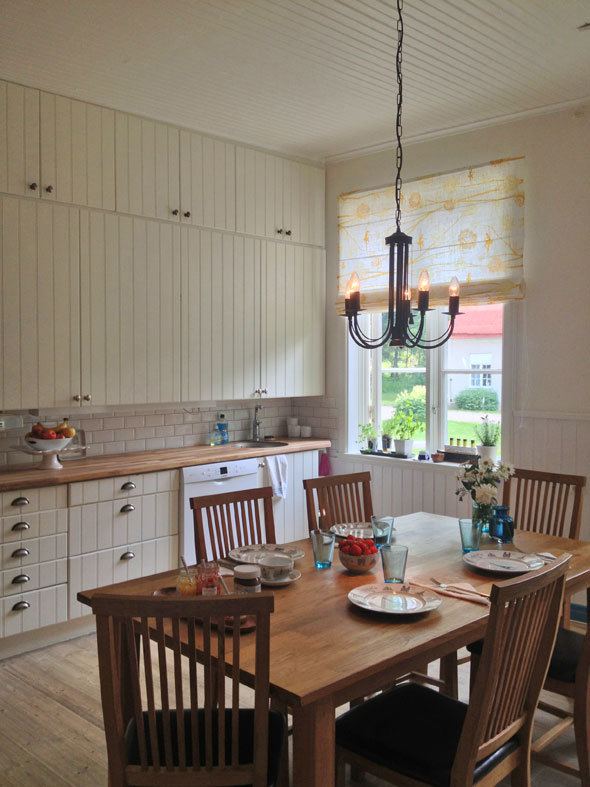 Welcome to my country kitchen

The house was built around 400 years ago, and many of the rooms still have the original features for example wall and ceiling paintings and almost every room downstairs has a fireplace. The kitchens those days were large and built for a few servants to work in the kitchen at the same time, and typically they were on the end of the house with a separate entrance directly to the kitchen. You can see the entrance on the side of the house if you look closely the exterior picture above. In addition to that, the kitchen has an access to the basement where all of the food was storaged at the times when there were no electricity and most of the food was harvested from your own land. Our house has extensive space in the basement, including a wine cellar. We are not using the basement for storage at all, we have plenty of space in the house, but I simply wanted to explain the history behind the amount of the doors in the kitchen. 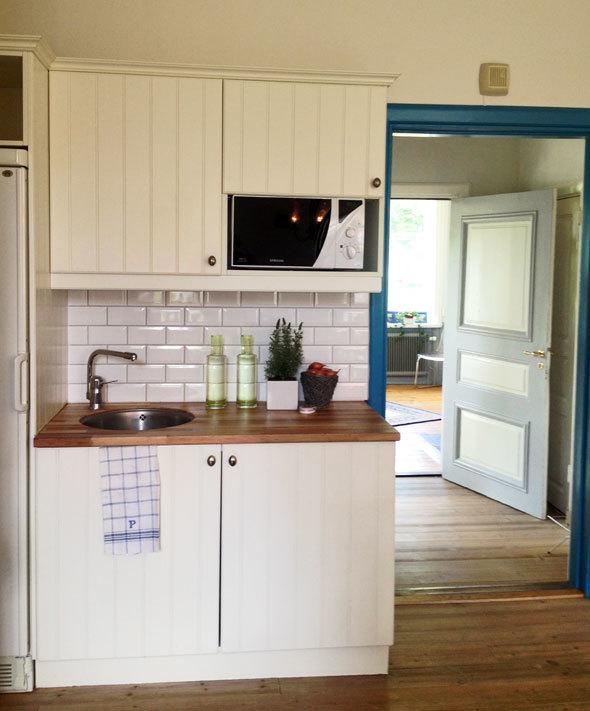 The entire house is like a maze and most rooms have two doors so you can close off the kitchen area in a way that you can access the main rooms from the kitchen. The kitchen has total of four doors. The interior doors lead to another small corridor that lead to more storage, bathroom and a corner room of the house and the last door leads to the butler’s kitchen. The kitchen is large enough to have a large dining table inside and even the butler’s kitchen has space for a table or two and it has the laundry room off it as well. 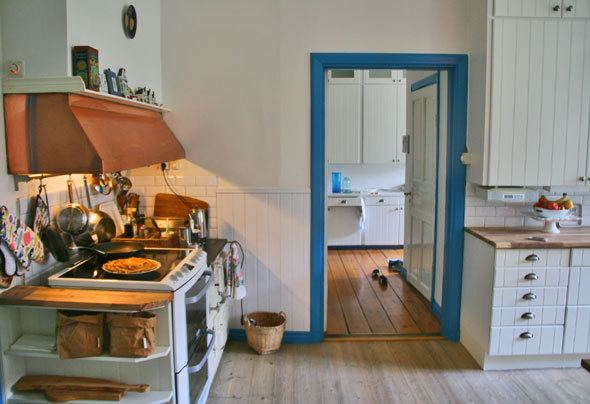 The “butler’s kitchen” is a secondary room next to the kitchen and it has large cabinets that span all the way to the high ceiling to hold all of the china, dinnerware, stemware and silverware and the counter top serve as a side table. The butler’s kitchen has an access to the foyer, to the living room and the dining room, like said, the house is like a maze and each room has at least two doors! I first thought the butler’s kitchen was kind of odd, well, old fashioned, but since it is right next to the dining room, it is convenient to have all of the better dishes there. And after hosting the first dinner party in the mansion, I don’t know how I lived without a butler’s kitchen before, they sure come handy when you are serving food for more than a family of five! 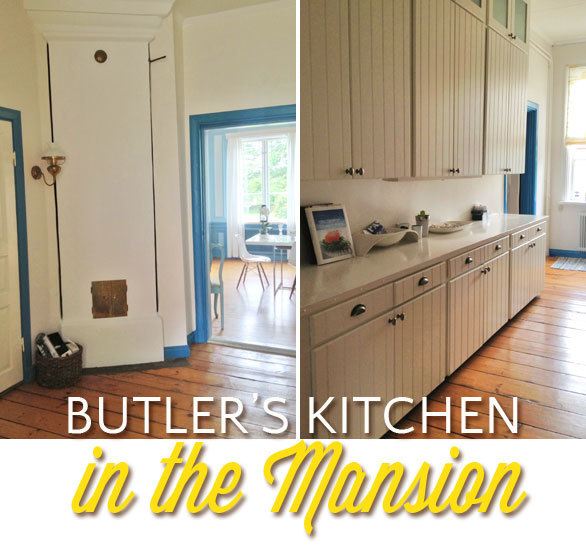 The kitchen has total of four doors and you can imagine it limiting the design capabilities, and the kitchen certainly doesn’t have the same flow as the kitchens of today do. For example, the stove is wedged in the corner between two doors. It’s more functional that you would think and I absolutely love cooking in this kitchen. The old wood-burning stove is not in use anymore, but I love how they have left it in the kitchen. I have just my collected cooking stuff and coffee pots and a toaster on the top of the stove, but I might clean it up and leave the top empty so it looks better. And yes – we are truly enjoying the slow living here and we don’t currently have any other coffee makers than two percolators. 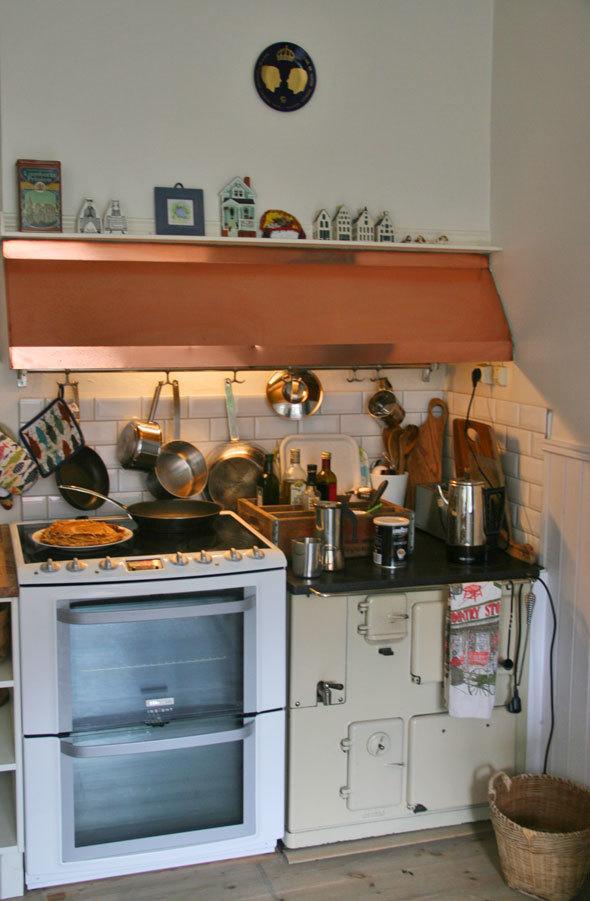 Since we are renting the mansion, we can’t really do any large renovations to the kitchen, but quite honestly, I think it’s a perfect country kitchen as it is so I probably wouldn’t make big changes even if I could (maybe change the faucets, and buy a new fridge…). My white dinnerware and blue glassware are like made for this kitchen, and I simply decorated with items that I use anyways (hanging pots!) and with a few finds from the travels and from flea markets, and the rest is from IKEA. Since we are moving again in 18 months, I try not to buy too much. 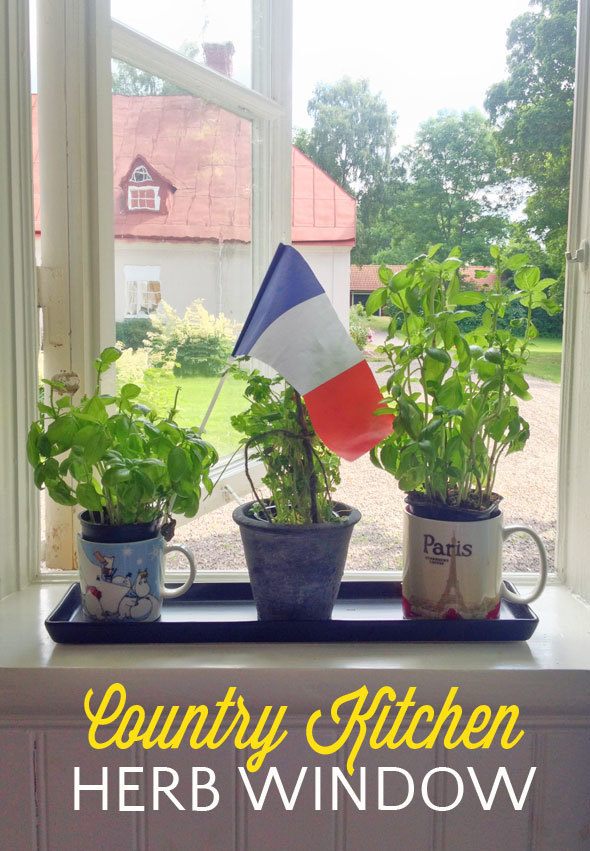 My windows are full of herbs that I use for cooking. I’ve bought assorted pots from flea markets and am using broken coffee mugs and drink glasses as well. At some point I will probably go to more minimalistic look, but for now our “souvenirs from travels” and personal mementos in the windows are what make me smile every day. 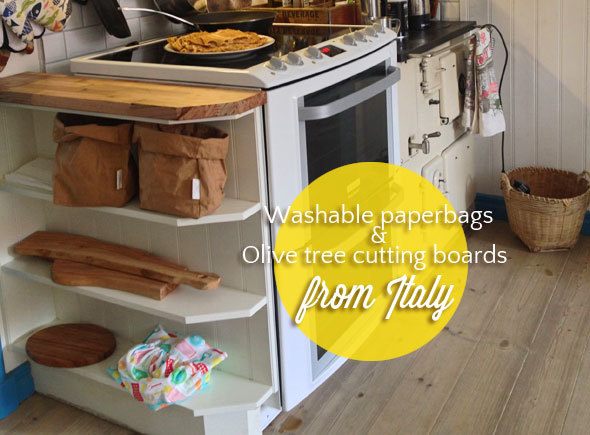 My washable paper bag containers from Tuscany are in daily use, and I love the cutting boards/serving pieces made out of olive tree wood, also from Italy. My kitchen is a mix of goodies from all around the world, and it all kind of works. (Side note: look inside my cabinet to see over 30 Starbucks mugs from around the world.) 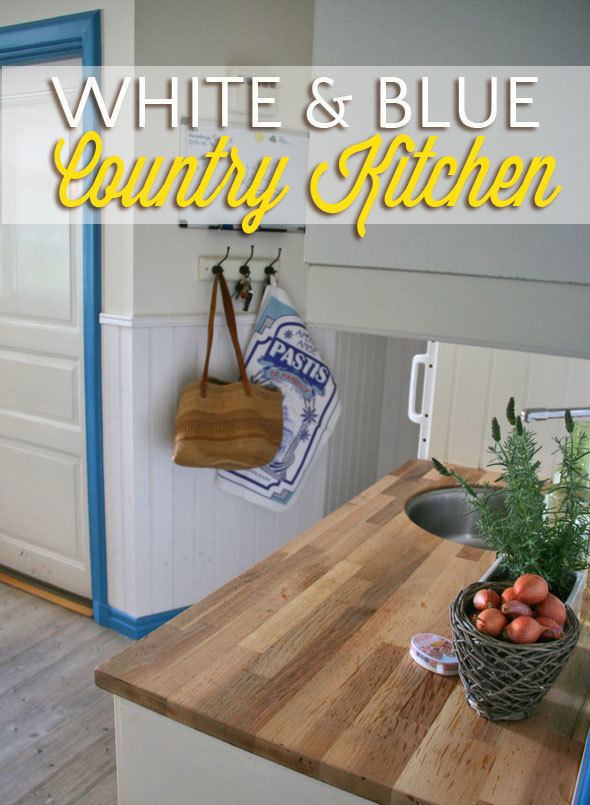 I try to keep the kitchen colors white and blue, but I’m not religious about it. My grocery bag and car keys hang by the door, and believe it or not, but the tea towel that I bought in France hides a fire blanket behind it. What, you don’t have a fire blanket in your kitchen? My dad gave mine as a gift when I moved to college, I’ve only used it once. 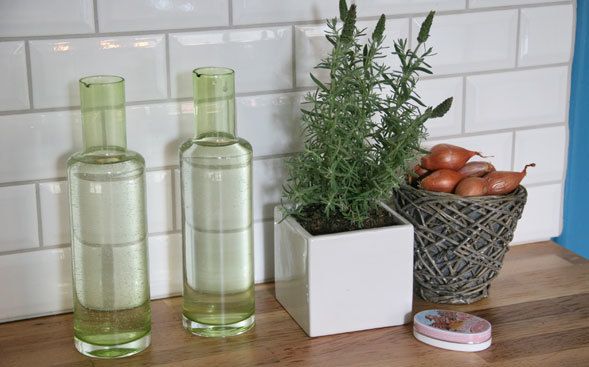 My mix of vintage dishes from the 40’s, cheap finds from discount stores and flea markets mixed with more expensive designer china all kind of go well together. Can you name from the picture below which one of the three dishes was dirt cheap and which one is the expensive one? 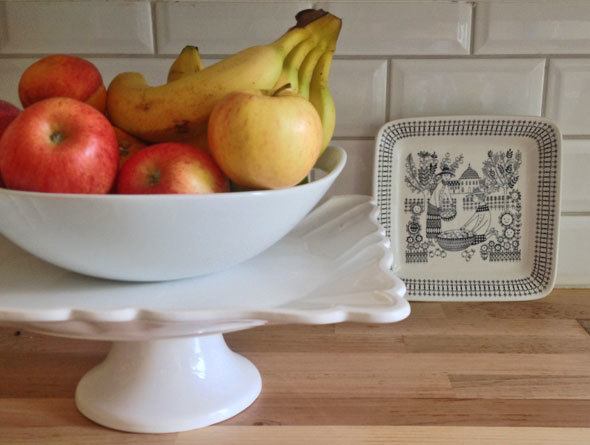 Late breakfast crêpes have been our family tradition for years now, and even more so after my oldest daughter learned to make them herself a few years ago. 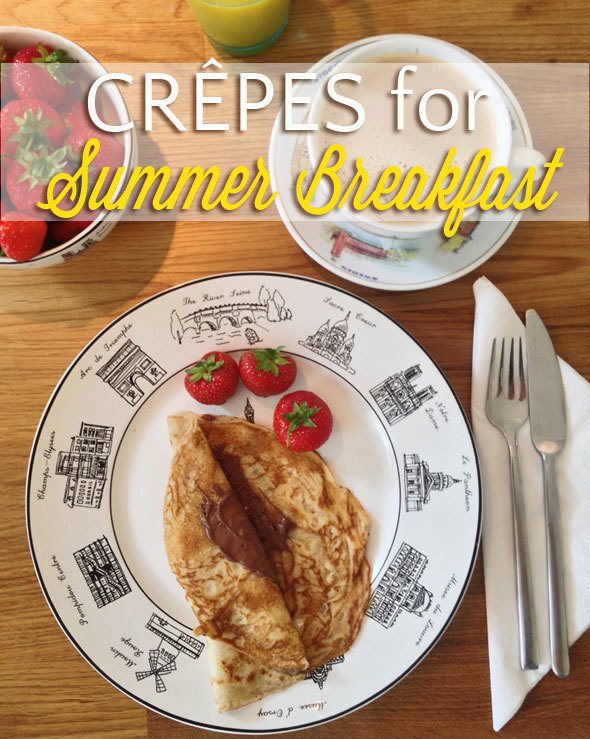 It doesn’t take much to talk Isabella into crêpe making and now when it’s summer, I typically work a few hours before kids even get up, and then we have a big breakfast together. This morning while Isabella was cooking crêpes, Kristian and I went to the garden to pick up flowers for our table and walked to the mail box to get the newspaper and say hello to our neighbors (cows and horses).

It’s country side, and we are living it (the slow way) to the fullest. 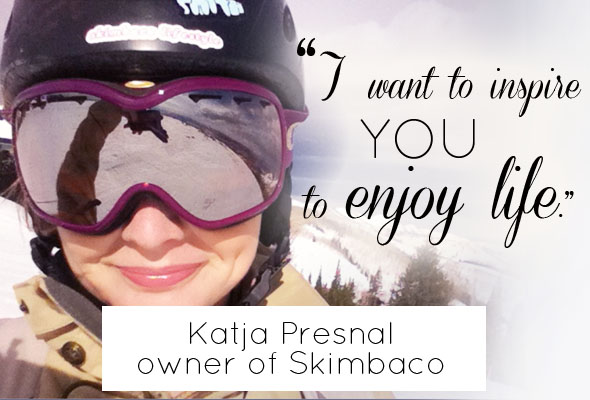